After years of life on stage and behind the magic shop counter, his wife Carole pointed out that Larry was a natural born teacher. So, while continuing to perform, he began learning about computers and presenting seminars on how to use computer applications for educators in the Metro Atlanta area. He taught computer literacy classes for the Southern Arts Academy and served as a private tutor to train computer staff for several small companies in North Georgia.

To hone his skills as an instructor, he returned to The University of Tennessee and earned his Masters of Science in Education degree working as a Graduate Teaching Assistant. He helped establish America’s first Macintosh-based Language Arts Lab in collaboration with Apple Computers, Knox County Schools, TeleRobotics Inc., and The University of Tennessee. This initiative, known as Project Legacy, received worldwide attention in the late 1980s for improving language arts skills in an inner city high school using software created by the school’s own English teachers.

Larry joined the faculty of Austin-East Magnet High School, home of the Legacy Lab, and he taught there for 12 years, continuing to give in-service training. He represented the school system in Washington, D.C., at a national technology conference. He served as President of the 500-member local chapter of the Phi Delta Kappa Education Association. His researched and presented an authentic Civil War era magic show as part of his volunteer work for the East Tennessee Historical Society.

In 2000 Larry joined the faculty of Wade Hampton High School in Greenville, South Carolina. Over the next 19 years he served a term as the president of the Greenville County English Teachers Association, won his school’s teacher of the year award, and pioneered the school’s Advanced Placement English Language program as well as teaching the school’s first broadcast journalism classes.

In 2001 Larry attended his first Chautauqua program, an evening with Herman Melville presented by Dr. George Frein, one of the founders of the resurrected American Chautauqua Movement. The following year’s festival included Thomas Jefferson, so Larry prepared an authentic 18th century magic show based on a journal entry by George Washington to open Jefferson’s performance. This was Larry’s first time on the Chautauqua stage. After that time he became a regular moderator and emcee for the growing Greenville Chautauqua program.

In 2005 Larry’s developed his first Chautauqua character – Ambrose Bierce, an American author and critic. Larry was guided in his preparation and presentation by Dr. Frein and the many outstanding Chautauquans whom Larry observed in the Greenville festivals. In 2007 he presented Houdini, a natural choice with Larry’s many years as a full time magician.

Since then Larry has developed performances for a dozen historic characters from Churchill to Einstein, from Davy Crockett to Walt Disney. He has been honored to be included in five different Chautauqua festivals across the country. And for each performance Larry strived as accurately as possible to portray the truth of his subjects and to teach the lessons of their lives that best inform and inspire his audience regarding the world we live in today.

When not performing, Larry is an active member of American Mensa and the International Churchill Society. 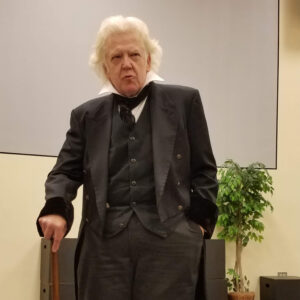 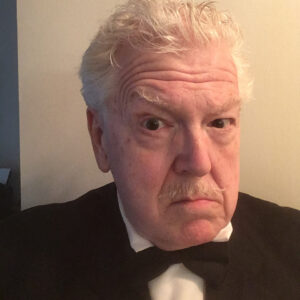 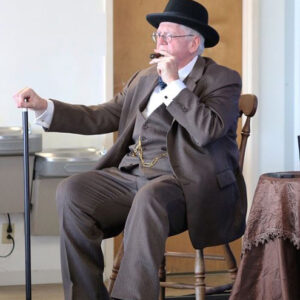 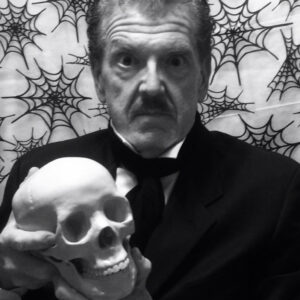